Italian fashion brand Herno has deployed an RFID system for loss prevention, inventory management and supply chain logistics, leveraging reader technology that is invisible at its stores. With the solution implemented at 10 of its global retail sites, Herno maintains each store’s aesthetic. When shoppers enter one of those stores, they are surrounded by greenery in keeping with the surrounding landscape, rather than technology. The RFID system is strategically deployed to accomplish product visibility without drawing attention to itself.

The system, provided by technology integrator Solos, consists of Keonn’s RFID readers, kiosks and software. The solution includes a combination of fixed readers according to each store’s design, as well as a reader station used at the point of sale to deactivate the UHF RFID tags sewn into each garment’s care label. All installations consist of hardware hidden either under the floor, in the ceiling or in the walls, enabling the entrance to remain completely unobstructed. The store’s aesthetics can thus be centered around natural environments and the products being sold there. 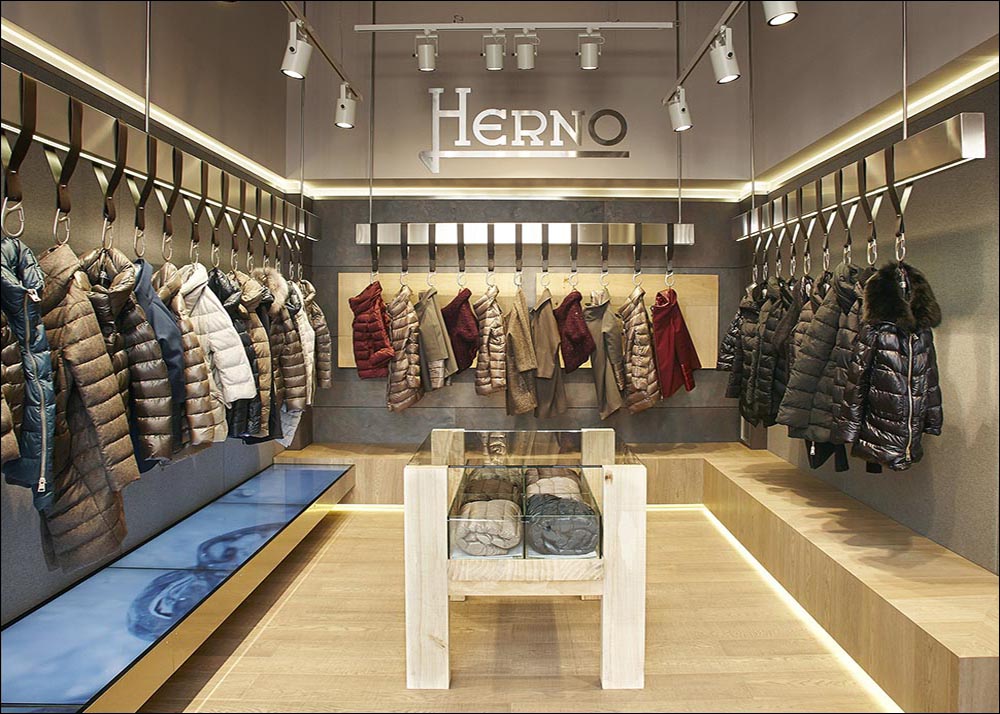 Herno has been offering outerwear, such as jackets and coats, in Italy since the end of World War II. During the past few years, the company has been growing globally, in part due to a new strategy focused around product engineering, flagship store sales and the natural experience provided to shoppers there. The company began planning the RFID solution with Solos in 2015, according to Alessandro Vivarelli, Solos’ CEO. At the time, Herno sought visibility into its luxury coats and jackets as they moved through the supply chain, with inventory counting in stores and the identification of each item that might leave the premises without being purchased.

From the outset, aesthetics were uniquely important to Herno, the company reports. It did not want to visually obstructive towers or sensors that might come with most EAS systems, and it didn’t want hard tags attached to its products. Instead, the company required small RFID labels for the garments sold at its stores, as well as printers to print and encode labels if goods arrived without them. The Keonn software collects and manages data, while Solos’ R-Link forwards the resulting information to the company’s enterprise resource planning (ERP) system.

Solos chose to implement a combination of Keonn’s AdvanSafe-200, AdvanMat-300 and AdvanGate systems, and each store also employs Keonn’s AdvanPay-160 station for tag deactivation. “Keonn’s products are built and designed to be invisible or perfectly camouflaged in store furniture,” Vivarelli says, adding that this met Herno’s requirements.

The tag’s small size posed a potential reading challenge, though Solos tested the tags at Keonn’s laboratory and designed each installation accordingly. A pilot was first launched at Herno’s Milan store, known as Via Montenapoleone. For the pilot, the store installed RFID technology at the doorway, deactivation station and point of sale. Following that, the company opted in 2018 to commence the full deployment. At each store, the read data is stored on the premises. However, Vivarelli says, “[The] next steps will be Herno POS integration in the cloud.”

When each garment is manufactured, a UHFRFID tag is sewn into the product. Each tag’s unique ID number is linked to the specific stock-keeping unit (SKU) information about that garment in the Solos software, which is integrated with Herno’s ERP software. The tags can be read as the goods move to a store, and again as they are received. With this data, Herno knows which products are on site at each location, as well as when inventory refurbishments might be necessary or if bottlenecks have occurred in the supply chain.

Once the apparel is received and scanned into the system at each store, it is displayed on the sales floor. At some stores, an AdvanSafe-200 overhead reader with beam steering is built into the ceiling. It detects each tag ID number as items move through the doorway, thereby alerting sales associates if a tagged item is leaving the site, for loss prevention and re-ordering. The AdvanMat-300, in some cases, is installed in the floor to capture tag IDs for the same purpose. The AdvanGate consists of discrete pedestals installed around the doorway.

The AdvanPay reader is situated near the point of sale, where tags can be read and deactivated once a sales transaction is complete. Each tag can then be reactivated if a customer returns any of the garments. The solution was rolled out beginning in the summer of 2018, and the technology is now live at all 10 stores. While the pilot store was the first to go live, it was followed by other sites in Paris, London, Cannes, Manhattan’s Soho neighborhood and Woodbury, N.Y. The most recent opening in Venice took place in June 2020. The RFID deployment at each site is somewhat unique with regard to furniture, the buildings and the rooms in which the goods are being sold.

The company faced a challenge in the past year when it switched from inlays on paper hangtags to tags on care labels integrated on items from the first manufacturing stages. The Keonn and Solos system was able to ensure the tags could easily be read with the RFID readers, Vivarelli says, since Solos specializes in customized solutions based on clients’ particular needs. The Keonn software also helped to manage false alarms, despite Herno’s furnishings being made of wood and metal.

“Our RFID loss-prevention systems can be easily adapted to the needs and preferences of each store,” says Ramir De Porrata-Doria, Keonn’s cofounder and CEO. Keonn’s RFID floor modular system can cover any entrance width and is designed for flexibility, De Porrata-Doria says. The RFID overhead system, with primary and secondary units, can cover any entrance width for situations in which visual deterrence is important. RFID electronics can be hidden behind walls, he adds, if neither floor mats nor overhead systems can be used and the loss-prevention solution must remain invisible.

Retailer Rolls Out RFID Across 1,000 Stores This Year