A global energy company is testing a newly released passive sensor tag that measures temperature levels—and, in one version, mechanical strain—then transmits that data to nearby readers via UHF RFID. The AS321X chip was developed by French technology company Asygn. A preliminary version was being tested as early as spring 2019, while the latest iteration is now ready for commercial-scale rollout.

The energy company, which has asked to be unnamed, is testing the new chip in an adhesive RFID label in France. If the pilot meets expectations, the company could opt to deploy the tags for passive wireless condition monitoring of its power-generating equipment in the United States and Asia. 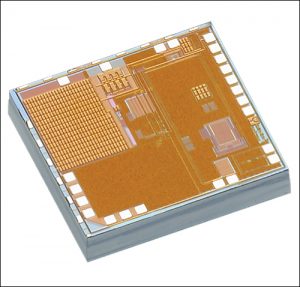 The company has worked with RFID in the past, but it had not previously identified a product that could capture sensor data without requiring a battery, as well as transmit a signal in a highly metallic environment at a distance of more than a few meters. Asygn’s chip can typically be interrogated at a distance of about 5 meters (16.4 feet), says Lionel Geynet, Asygn’s RFID and RF project manager. The product was developed as a low-cost wireless sensor solution for the industrial, automotive, aeronautics and logistics markets.
Asygn has already provided its sensor technology for approximately a decade, the firm reports, but the AS321X is the first wireless RFID-based device that is entirely passive. The temperature sensor is integrated directly on the silicon. The chip can provide other sensor data as well, such as magnetic-based position awareness and strain. “The UHF sensor IC is now going into production, and we have our first applications with customers,” says Nicolas Delorme, Asygn’s CTO. “Our standard evaluation kit and samples are now available,” he adds, with production ready chips to follow shortly.

The equipment for which the company is tracking conditions are large, highly metallic machines with rotating parts, and can stand at a height of approximately 15 meters (49.2 feet). The company tracks conditions in and around the machines at sites throughout the world, but there are some limitations in regard to the wireless collection of data. The energy company cannot apply batteries to the equipment, and it already has its own wired strain gauges that could be leveraged, though they require wireless connectivity to collect that data automatically. In addition, transmitting information from the equipment to a reader, often from a high point on the machinery, posed a challenge for RFID technology.

The company is now testing the Asygn product as a potential solution. As part of the testing, the end user will employ its own existing strain gauge, wired to Asygn’s AS32-11 chip with a built-in link to connect to the strain gauge via four wires between the gauge and the tag. The Asygn chip will forward data from its own temperature reading, along with the wired strain sensor. Asygn recently developed a strain sensor chip, the AS32-30, and that new product could serve as an alternative that the company says would eliminate the need for the wired strain gauge altogether. It plans to test the AS32-30 against the wired strain gauge as part of the pilot, Delorme explains.
If adopted across numerous sites to track the conditions of dozens or hundreds of machines, the tags could be low enough in cost that many tags could be applied to each machine and fixed readers could then be installed within range of those tags. For a full deployment, Delorme says, a reader with four or five antennas would cover a large area in a typical equipment room. “That provides a global picture of the conditions around each piece of equipment,” Geynet states.

The goal of a global rollout would be to put tags on all new machines as they are acquired, and to retrofit all existing ones. The tag would simply be attached to the material a user wished to monitor. As long as the bond was tight against the material, such as the side, the chip would begin detecting data, including strain. The Asygn chip is also being piloted by other companies in the industrial sector. For instance, one business is testing the chips to capture the amount of pressure exerted by conveyor belts at an assembly site. A logistics company is measuring light with a built-in photodiode to determine whether a package has been opened during the supply chain or while in storage.

The chip features a magnetic sensor that measures the distance between two metal parts. Since the equipment being tracked is typically composed of metal, the tag can detect any items in the immediate vicinity, based on the current in the magnetic field. “This measurement can deduce the position of one part compared to another,” Geynet explains. The product can then be used for such applications measuring the angular positions of rotating machines or monitoring changes in bridge position (which would indicate a potential problem).

Another company is testing the chip to monitor tire pressure. A tag could be placed on the sidewall of each tire, and it would then transmit an alert in the event that the pressure level fell outside the acceptable range. This, the firm explains, could potentially reduce the threat of damaging tires during use. The system is also being utilized to detect the temperature of automotive brakes in order to ascertain their level of wear. “Our chip is able to operate up to 120 degrees Celsius [248 degrees Fahrenheit],” Delorme says, “so we have many applications for monitoring temperature in the industrial domain.”

Asygn is vendor-agnostic and can work with any UHF RFID reader, Geynet reports. “That’s one of the main advantages of our chip,” he states. The sensor data is stored in the chip’s memory and can be captured via a standard read command. A user’s own software would then be used to manage the collected sensor data. The energy company is using its own software to manage that information.

This article is come from rfidjournal.com.